Today we look at the final heart issue of the people:

They’ve just been rebuked for challenging God’s justice, and yet their hearts still believe that God is being tested by the wicked in their midst, unable to succeed against them. First they were questioning God’s justice and now they are testing His strength against mere men!

How often do we do this? He conquers in one area of our fears and so we fixate on the next!

But then we see another group arise out of the population: those who feared the Lord.

We see here that there were those amongst the population who feared God and responded to the message of the Lord through Malachi. What a joy for Malachi to see fruit from his ministry (because not all the prophets did!).

We see in these verses that a distinction is being made between the righteous and the wicked. The parallelism in 3:18 shows us who falls into which camp:

A distinction will be made.

And this comparison between the wicked and the righteous continues into chapter 4 when we look at the Day that is coming. Looking at the language we see that this is final judgement: All arrogant and evil doers will be stubble, none will be left; neither root nor branch will remain.

There will be a time of judgement on the unrighteous. God will judge between the righteous and the wicked, but in His timing, and not under the pressure of man. He is a God of Justice, and He will prevail. Until this time, the righteous are to continue in faith, trusting in God’s holiness and uprightness.

Finally, the book ends with a charge to remember the Law because God is sending Elijah the prophet before the great and awesome day. What is the fulfilment of this prophesy according to the New Testament? Have a look at Matthew 17:12-13 and  Luke 1:16-17.

So what is the application for today?

We have seen the coming of John the Baptist and the first coming of Christ. We know we are His treasured possession and we can have confidence for the Day of the Lord,  at His second coming. In the meantime, we are also called to continue in faithfulness with a right heart. We who know God should be motivated to serve Him. 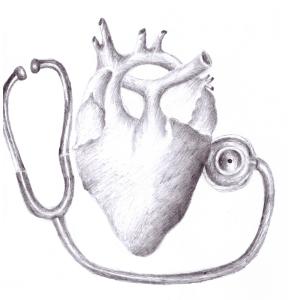 *Serve God with a faithful heart

I want you to really listen to Paul’s final charge to Timothy. Listen to it as if Paul is writing it to you:

I charge you in the presence of God and of Christ Jesus, who is to judge the living and the dead, and by his appearing and his kingdom: preach the word; be ready in season and out of season; reprove, rebuke, and exhort, with complete patience and teaching. For the time is coming when people will not endure sound teaching, but having itching ears they will accumulate for themselves teachers to suit their own passions, and will turn away from listening to the truth and wander off into myths. As for you, always be sober-minded, endure suffering, do the work of an evangelist, fulfill your ministry.

For I am already being poured out as a drink offering, and the time of my departure has come. I have fought the good fight, I have finished the race, I have kept the faith. Henceforth there is laid up for me the crown of righteousness, which the Lord, the righteous judge, will award to me on that Day, and not only to me but also to all who have loved his appearing. (2 Timothy 4:1-6)

Half way through the text! Well done! Today we hit the fourth issue in the hearts of the returned exiles:

The people were asking: “Where is the God of Justice?”

The rest of the book deals with the God of Justice; showing that God will make a distinction between the righteous and the unrighteous; those who walk in His ways and those who oppress justice.

In chapter 3, we see God answer their questions. They accused God of delighting in evil doers. Here we see how wrong they were. He answers by revealing two more messengers; the final two messengers mentioned in Malachi.

That’s about all the “free information I’m giving you today – now I’m going to ask you to be a bit more active!

[Think through it, and jot your thought down].

This is clearly interpreted in the New Testament. See:

What was John’s role?

Second, who is the Lord, the second messenger, who will come quickly to the Temple?

[Think through it, and jot your thought down].

What was Christ’s role?

Note 1: A refiner’s fire led to the purifying of silver through use of a furnace’s heat.

Note 2: Soap as we know it had not been invented. Rather an alkali (made from plant ashes) was used to whiten new cloth. Fuller’s cleansed new cloth by stamping it with their feet.

So the four messengers mentioned in Malachi have now all been seen. Let’s recap quickly:

Who are the sons of Levi that Christ purifies?

Note 3: This passage is an example of prophetic telescoping. This simply means that one prophesy looks at a series of events that will occur. The closest, first event, gives encouragement for the later events once it is seen. In this case, John was to prepare people for Christ. Today, having seen his first coming, we can have confidence for His final coming.

So what is the application for us today?

*It’s time for our heart check up

This book is a call to walk in holiness before the Lord. Let His Spirit and Word refine and mould you into His image. His Word really is a light and lamp unto our feet. Let us go on to maturity in Christ, so that we can commend ourselves just as Paul did:

We put no obstacle in anyone’s way, so that no fault may be found with our ministry, but as servants of God we commend ourselves in every way: by great endurance, in afflictions, hardships, calamities, beatings, imprisonments, riots, labors, sleepless nights, hunger; by purity, knowledge, patience, kindness, the Holy Spirit, genuine love; by truthful speech, and the power of God; with the weapons of righteousness for the right hand and for the left; through honor and dishonor, through slander and praise. We are treated as impostors, and yet are true; as unknown, and yet well known; as dying, and behold, we live; as punished, and yet not killed; as sorrowful, yet always rejoicing; as poor, yet making many rich; as having nothing, yet possessing everything. We have spoken freely to you, Corinthians; our heart is wide open. (2 Corinthians 6:3-11)